Outdoor Display Ideas to Make Your Event a Success07 April 2015Next

5 Ways to Increase Conversion at Point of Purchase12 May 2015

Today’s featured article is one discussing the importance of connecting to a space. This renewed perspective on Spring and Summer promotional events has lead to increased demand for outdoor spaces as convention venues. People enjoy being outdoors, it seems ingrained in who we are. When people can be outside they feel like they are having a better time, accomplishing something even if they really aren’t doing anything different. Outdoor scenery creates the feeling of soaking up the sites to genuinely “visit” a place compared to being stuck inside all day at a venue. Read more from Exhibit City News.

On a riverfront terrace with a view of the city skyline, it could be easy to take in the lounge-like setting and mistake it for something other than what it is: a convention center in Detroit.

The riverfront terrace at the Cobo Center in Detroit, which is in the midst of a multiyear renovation project, opened about a year ago. There will soon be an adjoining plaza providing additional event space.

While a smattering of convention facilities have had outdoor space for a long time, convention center managers and architects point to reasons for more interest in such amenities.

“Over the last few years, we’ve been hearing more and more from these people that conventioneers don’t want to be locked in,” said Todd Voth, a senior principal, Populous, an architecture firm. “I really think people that go to conventions are sick and tired of being stuck in a building all day.”

Outdoor space helps visitors feel as if they are experiencing the city they are visiting despite spending all day at a convention, Voth said.

“Sometimes, they don’t have enough time to explore too far, but if you could just let them get outside, it gives them a sense of experiencing something beyond the walls of the building,” he continued.

Parks, plazas and terraces also help integrate sprawling, oversize convention facilities with the buildings around them – while giving the neighborhood some figurative breathing room.

“Urban centers need open spaces,” he said. “We’re seeing more of a movement towards integrating the center and its surroundings with the community.”

One Populous project is the $325 million renovation and expansion of the Henry B. Gonzalez Convention Center in San Antonio, an important facet of which is to give the center a front lawn through redevelopment of an adjacent park.

The first phase of the 46-year-old center’s overhaul — rerouting streets to accommodate a change in the center’s orientation — began last year. The project is to be completed in 2016.

By 2018, planners envision turning the adjacent Hemisfair Park, site of the 1968 World’s Fair, into a complete district including cafés and galleries as well as lawns, gardens and other spaces that can be booked by convention groups.

In addition to the park, the center will have outdoor spaces intended for group bookings.These are big investments, but they can pay dividends in the form of business that would otherwise go to hotels or other event sites.

“There’s pressure for finding new revenue sources for these buildings,” said Ken Stockdell, vice president and convention center group practice leader, HKS. “That’s attractive to the convention center on the operational side of things because food and beverage is the No. 1 income generator after space rental.”

“You’re getting squeezed a bit with the rental income right now,” said Muldoon. “Cocktail receptions or dinners can bring additional revenue to a center. Staying in one place saves convention planners the expense of busing participants to another location.”

Since these outdoor areas often include lighting, audiovisual and electrical hookups, convention planners also do not have to spend more money to rent and temporarily install this equipment.

At Anaheim, Calif., which added a 100,000-square-foot plaza last year that links the convention center to the adjacent hotels, that space has been used for everything from yoga classes to food truck feasts. Out of 84 events that took place in the convention center last year, 65 of them made use of the outdoor plaza.

We hope you’ve enjoyed learning more about how outdoor convention spaces improve how an exhibition is received and how they help visitors connect with the venue in a more memorable way.

Have questions on which outdoor displays are the best fit for your objectives and budget? The Monster Displays team can be reached at Sales@MonsterDisplays.com or call (888) 484-3344, we’d love to put our experience to work for you. 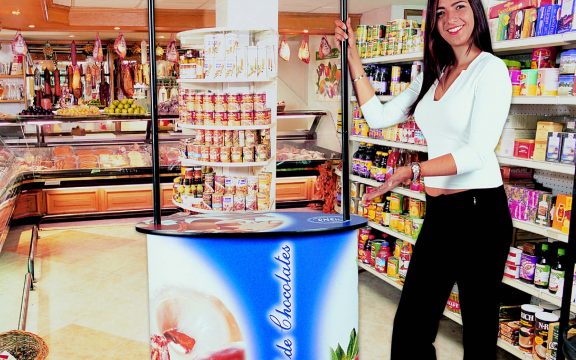 How Product Demos Can Benefit Your Company